Your recently released album compiles two previous EPs. Is the music presented exactly as it was, or were any changes made? Were they any special considerations that went into bringing the EPs together, such as perhaps the ordering of tracks?

Greg Bullock: Yes, it is primarily the same. The one difference would be “New(er) Dark Age”, which was turned into a radio edit. Originally over 7 minutes long, we cut out a guitar solo at the end to take about two minutes off … more radio-friendly, but still not a 3-minute song. Other than that, they are all the same tracks as we used on the EPs.

How and when did Cyborg Amok initially come together?

Greg Bullock: In early 2019 Brydon and I began to explore songs I had written over the years as a recording and performance project. I had a bunch of demos, so we approached them from a band perspective and built them up to what you hear on the LP.

Did you conceive of it as being either primarily a live or studio project?

Greg Bullock: Originally, I think it was a studio experiment at first, with the idea that we’d eventually perform the music with a band line-up. We engaged a guitarist at that time to work with us on developing them for performance, and then recording an EP became our focus. So, I’d say it is a studio project that morphed into a performance project.

What made you choose the name Cyborg Amok?

Greg Bullock: The name came out of a discussion around the dinner table I had with Brydon. I had been talking about my two knee replacements and a shoulder replacement. He commented, “Dad, you have enough new parts in you to be a cyborg”, or something close to that effect. Boom! We were looking for a name for the project at the time and Cyborg clicked. “Amok” came from the times we were living in … COVID was rampant and everything around us seemed out of control. Thus, “Cyborg Amok” was born.

Greg, I see that you are credited as the writer of all the songs, but the recordings really allow the other musicians to shine. What is your collaborative process like? Do you demo things electronically and then present it to the other musicians?

Greg Bullock: I have been writing songs for many years, mostly on my own. I just start with an idea and build on it. Typically, I develop all of the parts myself, but when I present the drum parts to Brydon or the guitar and bass parts to other musicians, I present them as guidance. I don’t want a musician who has a heart and soul to be stifled in their performance. I want them to take my musical idea and inflect their own voice and personality. If you work with the right people and give them space, it usually makes what you do better.

Do other projects you are or have been involved with impact your work with Cyborg Amok? (Either influencing it in some way or motivating you to use Cyborg Amok as a vehicle for things you otherwise didn’t have an outlet for.)

Greg Bullock: Currently I also work as keyboardist with the Antoine Poncelet Band. Antoine is a very talented songwriter who lets me do “my thing”, rather than dictate what he wants from me in his music. I greatly appreciate that approach, because I don’t think I could do it any other way. The main difference being that in Cyborg Amok I am singing as well as playing keyboards, so I’m limited in the parts I can play live. With Antoine, I am the keyboard player and that is all that is expected of me, so I get to stretch out a bit more. Both projects are extremely rewarding in their own ways. I also have solo projects that don’t necessarily fit the Cyborg Amok model, so they are outlets for the outlier Greg Bullock songs.

I read in another interview that you have a lot of new material ready to record. How do you think this music will compare with what you’ve released so far? Are you looking to do anything differently in the recording, in terms of sound or instrumentation?

Greg Bullock: I’ve built a catalog of songs over the years. The idea that sparked Cyborg Amok for me was taking some of those songs and developing them into a project with Brydon. Although, some songs were written from scratch with the project in mind, most were already developed demos. A few new songs will be written for the next project for sure, but, there are a few dozen sketches in various states to work with in the future as well. I don’t think the sound or instrumentation will change dramatically. Cyborg Amok will always be Brydon and myself at the core. The difference between the sound of the songs on our latest LP is because we used two different guitar players with distinctly different styles across the two EPs. The guitarist we work with in the future will have a voice in our sound down as well, so, down the road, depending on that persons’ style and personality, I suspect there to be subtle differences between what we’ve done and what we will do in the future. There will always be live drums, lots of synths, loops and sequencing, real bass and guitar … beyond that, experimentation is paramount.

With streaming and online distribution, many artists are shifting from focusing on albums to EPs/singles. Have you thought about how you’ll release music in the future?

Greg Bullock: Brydon, being from a recent generation believes we should release singles and build an EP or LP out of the collection of singles. I’m old school. I love the concept of the album as a work of art as a whole. So far, we’ve managed to meet in the middle.

What is in the immediate future for Cyborg Amok?

Greg Bullock: We are releasing our song “Burden Away” as a video on Halloween of this year. We have been rehearsing our live performance and are planning on doing shows throughout 2022 and beyond. At some point in the coming months, we will formulate a plan to do some more recording, possibly another LP. If Brydon has his way, we’ll be dropping singles along the way as well.

For more info, visit cyborgamok.com. Purchase the album at gabworxllc.bandcamp.com/releases. 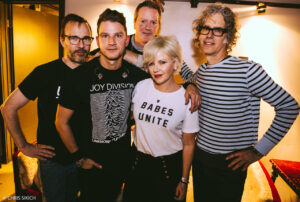